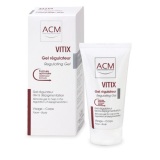 Vitix Gel is an innovative skincare gel that assists in re-establishing a normal level of melanin in the skin and preventing the progress of Vitiligo. It increases the probability of achieving satisfactory re-pigmentation by 50%.


Why is it in Vitiligo Store?
Vitix Gel is designed specifically to promote repigmentation of the epidermis by improving the physiological balance of free radicals in skin cells. Unlike many topical treatments available on the internet, it is based on sound, verifiable research and is manufactured by the highly reputable French dermatology laboratory ACM. Clinical studies have shown that this product can restore normal levels of melanin and halt or reverse depigmentation when used regularly with either phototherapy or sun exposure.


How does it work?
It works by creating a favourable environment for the melanocyte cells responsible for producing colour in the skin. Vitix increases the probability of achieving satisfactory repigmentation by 50% by normalising hydrogen peroxide levels in the skin. This repigmentation of white patches can be seen either appearing uniformly or as small round spots when the melanocytes have not completely disappeared from the depigmented area. Results in combination with phototherapy or sun exposure typically become visible between the second and fourth month of use.


Tips from The Vit Pro